Our SEWISC 2011 Roadside Survey information goes national – check it out!

EDDMapS is a web-based mapping system for documenting invasive species distribution. Launched in 2005 by the Center for Invasive Species and Ecosystem Health at the University of Georgia, the goal is to maximize the effectiveness and accessibility of the immense number of invasive species observations recorded each year.

↓ Click on image to see 2011 SEWISC records of teasel in Mequon, Ozaukee County 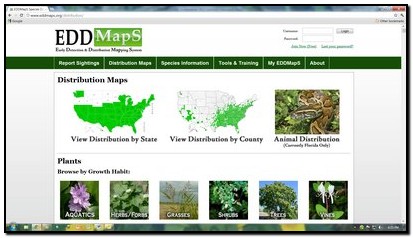 As of May 2012, EDDMapS has over 1.8 million records, and more than 2,000 of those records were collected by residents of southeastern Wisconsin during the 2011 SEWISC Invasive Species Roadside Survey.

EDDMapS combines data from other databases, organizations such as SEWISC, and from individual volunteer observations to create a national network of invasive species distribution data that is shared with educators, land managers, conservation biologists, and beyond.

Along with our 2011 distribution data for giant reed grass, teasel and Japanese knotweed, SEWISC's 2012 wild parsnip records will also be added to the database later this year. Visit the national database at: http://www.eddmaps.org/