Fourteen excellent proposals were submitted for funding to the 2015 SEWISC Assistance Program, which was graciously sponsored by the We Energies Foundation.  Although a challenging task, the selection committee chose four extraordinary on-the-ground invasive species control projects which will be conducted in our region over the next few months. The projects are summarized  below:

Private landowners, Jacki Lewis and Dick Adduci were awarded $1,600 for selective mechanical removal of invasive species on oak savanna habitat that they are working to restore. Funding will be used to purchase herbicide and for mechanical removal of buckthorn and honeysuckle within 4-acres of their 35-acre property. They have been managing common buckthorn, honeysuckle, spotted knapweed, garlic mustard, and oriental bittersweet on their land since the early 1990’s. Funds will also be used to create an access trail and firebreak within the project area to allow further prescribed burn management. This property will be a demonstration site for the Forest Weed Management Grant administered by the Friends of the Mukwonago River, providing training to the public on various techniques for invasive species removal. The property has also served as a demonstration site for Wild Ones and the “Got Buckthorn?” program in the Town of Mukwonago. 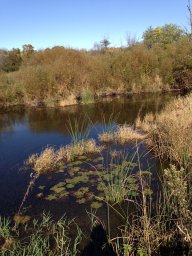 $1,400 was awarded to the Friends of the Mukwonago River, Inc. to support education, inventory, and control programs for Japanese knotweed throughout the Mukwonago River Watershed. This project will recruit and train citizen monitors to identify and report knotweed populations, inventory infestations, and treat established knotweed in highly visible public locations within the watershed. Funding will be used to hire a private contractor to conduct mowing and herbicide control on publically accessible plots of knotweed under the management recommendations included in the SEWISC Roadside Invasive Plant Management Plan. The project will also implement watershed-wide citizen education and monitoring workshops.  Other project partners include The Nature Conservancy and the Eagle Springs Lake Management District.

The Sheboygan County YMCA – Camp Y-Koda was awarded $840 for control and management of teasel, common buckthorn, garlic mustard, and Dame’s rocket within the Sheboygan River Area of Concern. Funding will be used to purchase herbicide and bark oil, as well as personal protective equipment. YMCA staff will host volunteer outings that will promote citizen-led stewardship opportunities for continued control and education within the project area. The outreach and control components of this project will involve several long-time partners such as UW-Extension, Wisconsin Department of Natural Resources, and the Sheboygan River Basin Partnership.

$1,290 was awarded to the Friends of the White River County Park for implementing prescribed burns and herbicide applications to control honeysuckle and buckthorn within the public park’s high quality natural areas. Since their formation in 2014 The Friends have already held several volunteer work days to control invasive species within the park. Funding will be used to purchase herbicide, bark oil, backpack sprayers, rubber fire flappers, a water pump, and a drip torch. The proposed project area also contains a large cedar barn that will provide space for outdoor educational programming with local schools, scout troops, and/or conservation groups. Project partners for the project include Walworth County, the Geneva Lake Conservancy, and Kettle Moraine Land Trust.