You know, those plants that produce seed once and then die

The Teasels, Wild parsnip, Sweet clover, Queen Anne’s lace, the biennial thistles, etc. are called biennials. Individual plants don’t all flower and make seed in their second year of growth so they can actually be short-lived perennials; but all these species are strictly monocarpic, which means that they always die completely after they make their seed.  Most grow as rosettes (a circular cluster of leaves that radiate from a center close to the ground like a dandelion) for their first year of growth, or until they bolt (send up a tall stalk from the center which will produce their flowers and seed).  Once they bolt, they have used up their central growing point and will not be alive the following year.  What lives on the following year is the seed that they have made; seeds of these species can remain viable in the soil for several (at least 6) years after they are produced. 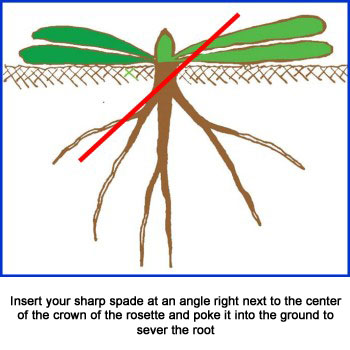 There is just one basic strategy to control monocarps: keep them from making seed.  If you prevent any seed from being produced, you will eventually eradicate the invasive.  For these biennials, there are many control options depending on the season, including chemical control at any stage before mature seeds are formed, hand cutting, and mowing.  Since spring to early summer is the ideal time for cutting the crown of the plant from the root, we will describe that simple method here.

Most of these biennials are tap-rooted (excluding Teasel) and it is relatively simple to kill the plant by cutting the root off 1” to 2” below ground (even Teasel) with a sharp spade.  The best time to cut the plants is any time from when you can find the rosettes in the spring, before they have bolted, to after they have bolted as soon as blooms show.  If the bolted plants become too mature, there is a risk that seeds on the cut off tops will mature, and you may have to remove the heads and dispose of them.

Use your sharpened spade, or get yourself a “Parsnip Predator”, a modified spade which can make the job even easier (made available through The Prairie Enthusiasts).  Wear gloves because you will want to pull the remaining rosette after you cut it from the root to make sure it is not still connected to some fine roots.  Thistles are prickly, and wild parsnip sap causes skin burns, hence the gloves.  Insert your sharp spade at an angle right next to the center of the crown of the rosette (see illustration above), and poke it into the ground to sever the root.  Pull the remaining rosette out of the ground.  The method is so simple and quick (especially using the modified spade).  This is nothing more complicated than using a larger-scale old-fashioned dandelion digger.

Happy control work!  The satisfaction of the invasive removal will be its own reward.