Not a moment’s rest for SEWISC. This season we are actively mapping and managing populations of five NR-40 listed plant species that have crept into our 8-county region:

Wild chervil (Anthriscus sylvestris) (left) is an herbaceous biennial that grows up to 3.25 feet with hollow stems that are covered in hairs. Plants grow aggressively to out-compete native vegetation by using resources more effectively and are forming extensive stands in Ozaukee, Sheboygan and Washington Counties. 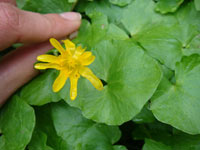 (right) grows as an herbaceous groundcover with kidney to heart-shaped leaves and daisy-like yellow flowers. Plants appear soon after snow melt and rapidly spread into new areas. After flowering in March and April, plants die back by June providing a very narrow window for which to search, identify and control this invader which is spreading in Milwaukee, Racine, Kenosha and Walworth Counties. 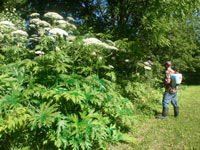 (below) is an herbaceous biennial or monocarpic perennial that grows as a bushy rosette the first year, and then bolts during the second year to 8-20 feet tall. The hollow, ridged stems are covered in coarse white hairs and reddish-purple mottling. Leaves are compound, 1 to 5 foot wide, palmate, deeply lobed and pointed. Flowers are large flat-top umbels, up to 20 inches wide across, with white, 5-petal flowers that bloom from May-July. To-date giant hogweed has been contained in Sheboygan County. Sap from giant hogweed plants can cause severe burns and blisters! 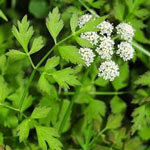 Water celery (Oenanthe javonica) (left) invades aquatic and riparian wetland habitats, choking streams and displacing native riparian vegetation in Milwaukee and Waukesha Counties. The plant is most easily detected and identified August-September and reproduces via seeds and runners (stolons), which may extend into waterways and break off, spreading fragments downstream that can establish new patches.