We are excited to announce that 11 excellent proposals were submitted for funding to the 2018 SEWISC Assistance Program, which was graciously sponsored by the We Energies Foundation.  Although a challenging task, the selection committee chose five extraordinary on-the-ground invasive species control projects which will be conducted in our region over the next few months. The projects are summarized below: 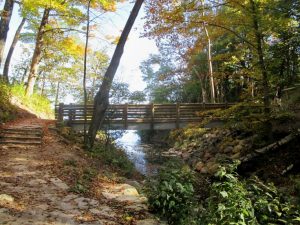 SEWISC awarded $1,556 to the Friends of Grant Park for an invasive species control project including the removal of garlic mustard, dames rocket, porcelain berry, Oriental bittersweet, Japanese knotweed, burdock and invasive shrubs within a two-acre plot known as the Will-O-Way area.  Funding will be used to purchase equipment and supplies required to complete the project.  The work will be conducted by park natural areas staff and TNC interns.

Geneva Lake Conservancy was awarded $1,500 for a rapid response project in Walworth County to control the spread of lesser celandine.  The project is two-fold with public outreach and information gathering as well as an on-the-ground effort to chemically control one of the area’s most significant infestations in Walworth county. Our funds will be used to pay for the contracted herbicide application and sedge plugs that will be planted in the treated areas.  Work will be conducted by GLC staff, the WDNR, and contractors.

A $1,000 award was given to the Martha Watts for ongoing invasive species control on a portion of a 105-acre parcel located Village of Grafton.  The project will focus on controlling invasive vegetation within a beech-maple upland forest which contains a relatively high quality forested area.  SEWISC funds will be use to hire a contractor to perform select invasive species removals within the focus area.

SEWISC awarded $700 to Charles Heide for invasive species control at Fiddlehead Gardens, a 68-acre privately owned former farm.  The funds will be used to purchase herbicide and permanent equipment for the site that can be used by the growing volunteer team. This project will focus on eliminating garlic mustard, honeysuckle, buckthorn and burdock.  Work will be conducted by volunteers and contracted professionals.

Last, but certainly not least, $238 was awarded to Weed Out! Racine for an invasive shrub control project at Colonial Park.  The project will focus on controlling buckthorn and honeysuckle re-sprouts that have been previously mowed by parks staff. The funds provided by SEWISC will be used to purchase a backpack sprayer.  The herbicide will be provided by the City of Racine Department of Parks, Recreation and Cultural Services and the treatments will be made by volunteers.

Funding for the 2018 SEWISC Assistance program was graciously provided by the We Energies Foundation. Watch for our 2019 call for applications in early January