We are excited to announce that eleven excellent proposals were submitted for funding to the 2020 SEWISC Assistance Program, which was graciously sponsored by the We Energies Foundation. Although a challenging task, the selection committee chose five extraordinary on-the-ground invasive species control projects which will be conducted in our region over the next few months. The projects are summarized  below: 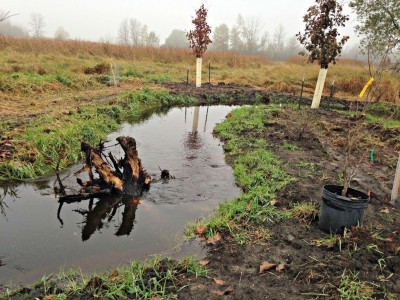 $2,000 was awarded to the Ulao Creek Partnership for invasive species management and native tree planting in conjunction with an ongoing large-scale habitat restoration within Ozaukee County’s Ulao Creek watershed.  The project site provides critical habitat for numerous native fish, herptile, avian and wildlife species. SEWISC funds will be used to provide partial funding to employ a conservation corps team that will assist with the control of herbaceous and woody invasive plant species.

Randy Reddemann & William Davidson were awarded $2,000 to fund an ongoing invasive species removal and restoration effort within the Mukwonago River watershed in Waukesha County. The project area is an important breeding ground for amphibians and a migratory bird stopover.  Funding will be used for mechanical cutting of treated buckthorn.

A $2,000 award was given to Sunny Lane Conservation Farm for continued control of invasive plant species in Racine County native prairie, wetland, and woodland plant communities. These efforts will enhance habitat for native wildlife populations, including butterflies, dragon flies, owls, hawks, wild turkeys, sandhill cranes and the Blanding’s turtle. SEWISC funds will provide equipment and personal protective gear for the volunteers and supplies needed for management and control efforts.

SEWISC awarded $874 to the Lynden Sculpture Garden to aid their efforts to control invasive woody species in a degraded prairie in Milwaukee County. This restoration project is part of an ongoing effort to restore the project area to a functioning, fire-dependent plant community while enhancing diversity of native flora and fauna. The Garden is situated between Lake Michigan and the Milwaukee River, making it an important stopover habitat for birds and other animals traveling along the two corridors.

Tall Pines Conservancy Land Trust was awarded $690 to eradicate a pioneer population of non-native invasive common reed in Waukesha County’s Mason Creek. Within a quarter mile of the infestation, three river systems flow through high quality wetland communities and into North Lake. This Early Detection and Rapid Response project will allow native flora and fauna to thrive without the threat of transformation into larger solid populations of non-native Phragmites. The SEWISC award will be used for equipment, labor, and herbicide.