25 Simple Ways to Help Our Planet

You don’t have to plant a dozen trees in your backyard (though we won’t stop you). Small changes to everyday choices and behaviors can cumulatively make a major positive impact on our planet.

Here are 25 simple steps you can challenge yourself, family and friends to take that will lead to a more environmentally-friendly and healthier lifestyle: 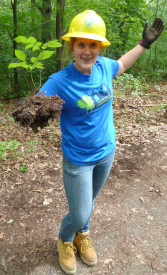 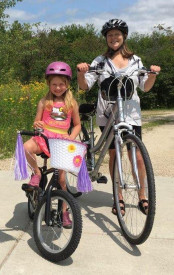 Thank you in advance for caring for yourself, our natural environment and our fragile planet.

This season we are continuing our work to map, manage and contain populations of four NR-40 listed plant species that have invaded our local communities.  We are working with the Wisconsin Department of Natural Resources to keep Prohibited invasive species out of our 8-county region. Early reports of new populations allow us to respond rapidly and control invasives before they spread into new areas. Visit Report an Invasive for reporting instructions.

Appearing in our region in 2016,  Lesser celandine (Ranunculus ficaria) (right) grows as an herbaceous groundcover with kidney to heart-shaped leaves and yellow buttercup flowers.  Plants appear soon after snow melt and rapidly spread into new areas. After flowering in March and April, plants die back by June providing a very narrow window in which to search, identify and control this invader which is spreading in Milwaukee, Racine, Kenosha,  Walworth and Washington Counties. 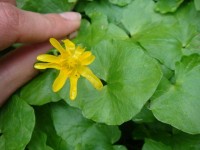 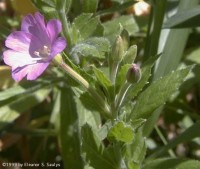 Hairy willow herb (Epilobium hirsutum) (left) is a semi-aquatic perennial herb that grows 3-6 feet tall, with fine, soft hairs covering the entire plant. Tall, branching stems form dense, monotypic stands that can be found in open riparian areas along streams, ditch banks, wetlands, and moist waste places. The plant is flood tolerant and spreads by seeds and stolons, which develop into rhizomes after growing into the ground. The rhizomes branch extensively and are growing up to 2 meters in length in Kenosha, Racine, Sheboygan, and Waukesha Counties.

Giant hogweed (Heracleum mantegazzianum) (right) is an herbaceous biennial or monocarpic perennial that grows as a bushy rosette the first year, and then bolts during the second year to 8-20 feet tall. The hollow, ridged stems are covered in coarse white hairs and reddish-purple mottling. Leaves are compound, 1 to 5 foot wide, palmate, deeply lobed and pointed. Flowers are large flat-top umbels, up to 20 inches wide, with white, 5-petaled flowers that bloom from May-July. To-date giant hogweed has been contained in Sheboygan County. Sap from giant hogweed plants can cause severe burns and blisters! 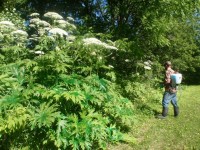 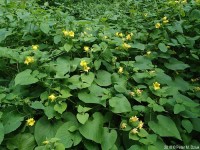 Red hailstone (Thladiantha dubia) (left), also known as golden creeper and Manchu tubergourd, is a perennial herbaceous 6 to 20 foot vine with showy, bright yellow flowers that bloom from July to September. Leaves are ovate with a heart-shaped base and stems are slender, climbing over other vegetation by means of tendrils. Plants reproduce by very persistent, widely spreading, fleshy, underground, potato-like tubers, making the species extremely difficult to eradicate in Waukesha County where it was first discovered in 2018. 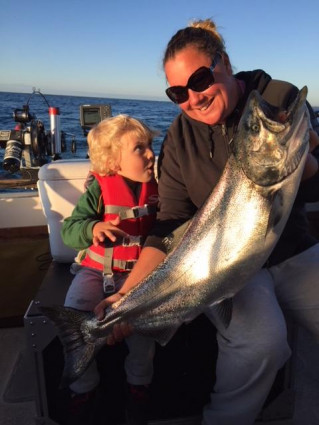 Amy Kretlow has been working with the WDNR invasive species program since 2014. She started as a Limited Term Employee (LTE) performing Early Detection Surveys on lakes and streams. For 10 months Amy worked out of the WI DNR’s Central Office as the Statewide Organisms in Trade Coordinator.

In August of 2016, Amy accepted her present position, AIS Response and Pathways Specialist for the southern half of the Lake Michigan Basin. She also serves as the AIS Regional Contact for Southeast WI. Amy has experience performing Early Detection Monitoring (lakes, rivers, and wetlands), Point Intercept Surveys, and Organisms in Trade reports and efforts. She has led projects such as testing different controls for starry stonewort and coordinated response efforts when graceful cattail was first found in WI. Amy graduated from UW-Milwaukee with a B.S. Degree in Conservation and Environmental Sciences. In her spare time, she loves hiking, fishing out on the big pond (Lake Michigan) and spending time with her grandkids. 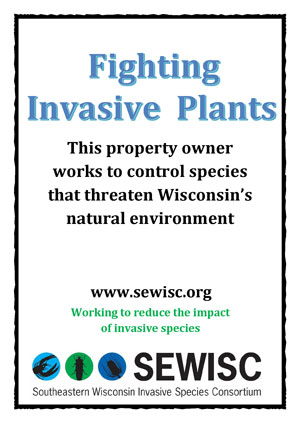 We are all spending a lot more time at home these days and even the smallest of efforts can make a big difference toward reducing the impact of invasive species.

Urban landowners as well as those who own and manage larger acreages can now encourage good stewardship and backyard conservation practices by posting these signs. Whether you have rural acreage, a suburban yard, or a city lot, you can help protect the environment by controlling invasive species and promoting that stewardship practice to others.

The high-quality 9x12 inch aluminum signs are available for only $20.00 each, or two for $35.00 (price includes shipping and handling).

Eight local proposals were submitted for funding to the 2021 SEWISC Assistance Program, which was graciously sponsored by the We Energies Foundation.  The selection committee ultimately awarded five small grants for on-the-ground invasive species control projects which will be conducted in our region over the next few months.  Here is a summary of those projects:

$1,994 was awarded to the Sheboygan County Planning and Conservation Department to conduct educational workshops centered on invasive species identification and control of common reed, purple loosestrife, reed canary grass, and garlic mustard. The proposed management will enhance habitat for rare and important species identified within and adjacent to the project areas. SEWISC funds will be used to provide for equipment, labor, and herbicide. 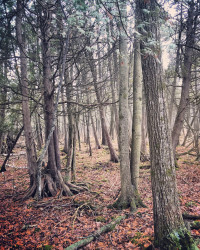 County Line Preserve cedar swamp lowlandGeneva Lake Conservancy was awarded $2,000 for removal and treatment of oriental bittersweet, poison hemlock, and common buckthorn on a portion of Conservancy easement properties. Once treated, project areas will provide additional habitat for valued animals such as Blanding’s turtle, queensnake, and eastern massasauga. Funding will be used to provide equipment and materials for mechanical and chemical treatments.

A $1,995 award was given to the Ozaukee Washington Land Trust to control common and glossy buckthorn at County Line Preserve, a conifer swamp designated by SEWRPC as “Natural Area of Regional Significance” due to its relatively undisturbed nature that supports numerous regionally rare species. SEWISC funds will provide equipment and labor for invasive species treatment.

SEWISC awarded $2,000 to the Kenosha County Division of Parks for treatment of common reed within Kenosha County Veterans Memorial Park. Kenosha County has restored approximately 70 acres of prairie in the park and the continued common reed management will result in an increase of migratory bird habitat and enhancement of pollinator habitat within region. Funds will be used to provide equipment, labor, and herbicide. 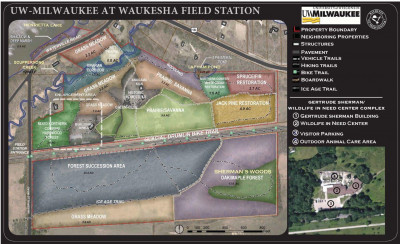 2021 funding for this program made possible by 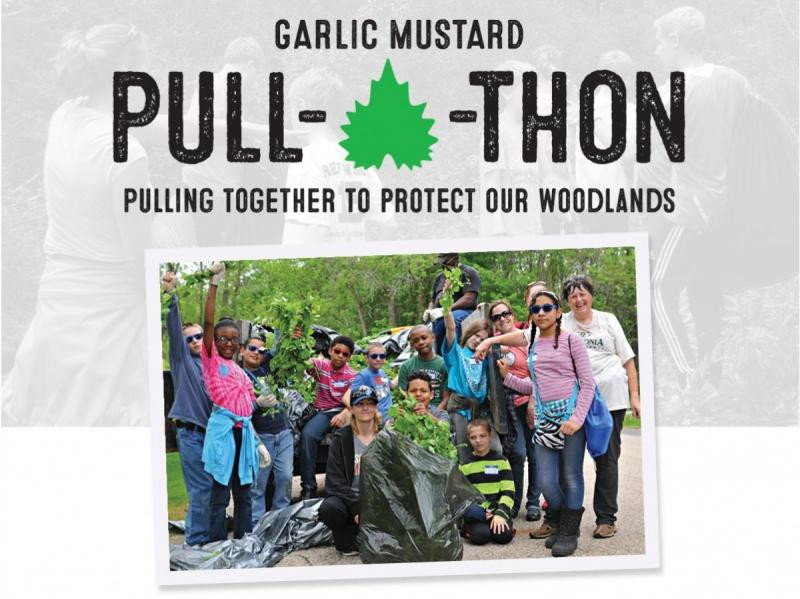 Garlic mustard is an invasive plant that is taking over our woodlands. It crowds out our beautiful native wildflowers and endangers forests by preventing tree seedlings from growing. To make matters worse, none of our native insects or wildlife eat it! 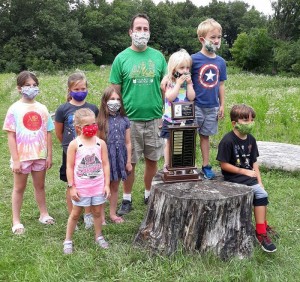 2020 Champs, Mr. Dargatz’s Nature KindergartenHelp us remove this invader and keep our local natural areas healthy. You can spatially-distance and safely pull garlic mustard during the 2021 Garlic Mustard Pull-A-Thon, a regional competition organized by SEWISC. Your efforts will help revitalize natural areas and raise funds for ongoing control, education, and outreach.

A trophy and bragging rights will be awarded to the Pull-A-Thon Team that rises to the top by June 30.  Hurry!  There are 3 ways you can still get involved with this fantastic effort:

The 2021 Annual Invasive Species Action Month of June will be filled with events, a video contest, the annual Invader Crusader Awards, and more.

Do you have your safe events all planned and just need to promote?  Email the ISAM Coordinator to register your invasive species workday, virtual workshop, or other fun stuff.

Thank You to Another 2021 Generous Sponsor!

We would like to thank our newest Early Detection Sponsor, Stantec who supports the mission of SEWISC by providing generous financial assistance.

SEWISC offers several Annual SPONSORSHIP levels and benefits. Select one that is right for you!

Please join Stantec in their support of SEWISC, the only regional organization dedicated to invasive species prevention, education, management, and control in Southeastern Wisconsin.