A new invader to our region 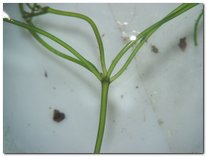 Classified as an endangered species in both the United Kingdom and Japan, starry stonewort (Nitellopsis obtusa) was recently discovered in southeastern Wisconsin.  This exotic macro algae is described as an aggressive invasive species in Michigan where, for the last decade, it has rapidly spread between inland lakes. The Wisconsin Department of Natural Resources (WDNR) reported that a small patch of starry stonewort was found in the east side of Little Muskego Lake in Waukesha County this past September.  Left uncontrolled, starry stonewort can form dense mats of vegetation that completely cover the lake bottom, preventing growth of native aquatic plants and diminishing pan fish spawning habitat. 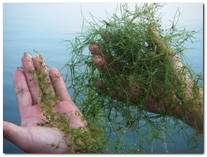 Unlike other charoid algae, it can grow to 2 meters (7 feet) tall at 9 meters (29 feet) water depth.  Starry stonewort produces oocytes which are transported easily on bird feathers and the fur of aquatic animals.  The oocytes can also be transported on plant debris caught on boats and trailers. Starry stonewort is listed as prohibited under the Wisconsin Invasive Species Rule, NR-40.  The WDNR has formed a response team which will work to develop a comprehensive strategy to contain and manage the population over the next few months.