Each year, the Wisconsin Invasive Species Council honors our citizens and organizations for their significant contribution to prevent, control or eradicate invasive species that harm Wisconsin’s lands, waters and wetlands. This year’s award ceremony was held on September 29 in Lake Mills and we are proud to highlight five awardees whose stewardship efforts benefit southeastern Wisconsin: 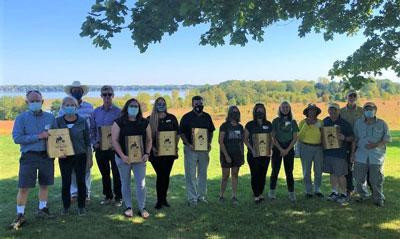 2021 Invader Crusader AwardeesEric Boettcher, Director of Parks and Recreation for the City of Whitewater, has been working to restore Whitewater’s lakes since his hiring. Eric developed a plan to drain Trippe and Cravath Lakes to eliminate the infestation of invasive plants. He reached out to educate the community and the lakes were drawn down for two winters, freezing the invasive plant populations. Dredging is planned, followed by revegetation and fish restoration. Thanks to Eric’s efforts, these lakes will be restored to their former glory, after which the city of Whitewater was named.

Tim Richert volunteers with Humboldt Park Friends. The park’s Lagoon was infested with invasive species including cattail, so Tim researched alternative control methods and developed a volunteer based removal program. A Lagoon Restoration committee was formed and a restoration plan was developed. Due to COVID19, the plan is still under review but with Tim’s dedication, the Lagoon will have a fighting chance! 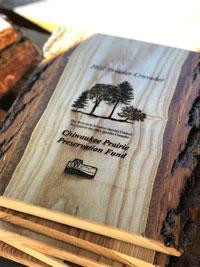 The River Revitalization Foundation (RRF) is a local group dedicated to conserving the Milwaukee River Greenway. The RRF coordinates volunteers to remove invasive plants from the Greenway and in 2020, they hand pulled almost 5,500 pounds of garlic mustard! The RRF also works to increase biodiversity of the Greenway by planting native species and also by selling them to the community. The Greenway is already showing results; the number of bird species present has increased from 8 to 85 over the last six years.

The Chiwaukee Prairie Preservation Fund (CPPF) cares for the Chiwaukee State Natural Area. The volunteer organization works to control invasive plant species and lead educational field trips. Their restoration efforts include a native plant sale and propagating native seeds for transplanting. All members of the CPPF are dedicated to protecting the endangered and threatened species that are important components of the prairie community.

Peter Dargatz, a kindergarten teacher in Menomonee Falls, has created an outdoor classroom, trail, and family nature club at Woodside Elementary School. Peter’s students teach their parents about what they’ve learned and everyone is able to get involved by volunteering with the Ice Age Trail, local nature preserves, and county parks. By teaching the importance of identifying and controlling invasive species, Peter is ensuring that his students will be caring stewards of our natural environment for life.

This season and throughout the year, help stop the spread of invasive species by supporting the only organization dedicated to invasive species prevention, education, management and control in southeastern Wisconsin by:

And by safely supporting your local businesses